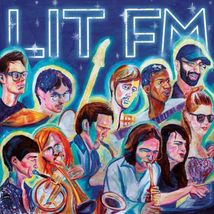 Lit FM are a 9 piece fusion ensemble consisting of 4 horns, guitar, drums and bass on rhythm, and vocals/keys, playing an eclectic mix of styles ranging from soul/funk/disco to latin/dub/jungle and hip-hop.

Lit FM are a spiritually conscious and international Disco / Soul-Dub / Latin / Jazz-hop fusion band founded in South London in 2014. The members originate from across the UK, Italy, Poland and the US, and are fronted by award-winning Polish vocalist Karolina Micor. Unified by chance encounters and a love of groove-laden music, they quite simply broadcast positive vibes encapsulated within a style which encompasses the history of jazz music; all the way from the american and latin roots, then through funk, soul, disco and ending with hip-hop and jungle. And there's always a message involved.

The group consists of a core of 9 members, extending to as many as 15 to make a maximum 6-piece horn and 3 part vocal sections, with the staple setup of vocals, keyboard, drums, bass, guitar and horns.
We released an E.P at the end of 2016 which was written, recorded, and produced at Lit FM headquarters - a house in Tooting in which we rehearse and some core band members live. We are currently focusing on writing and recording a 2nd EP which is to be released withing the next few months, this time with a more professional setup. The first track from these session will be available April 22nd 2017.
We currently hold a monthly residency as the band for hip-hop night AndWhat?Ldn, providing the beats for the swarms of MC's passing through, so go ahead and come down for it or check the 'upcoming gigs' tab for more gig info.
If you want to give us a listen you can check our soundcloud here - https://soundcloud.com/lit-fm

We are always open for live gigs and new venues so if you like our material then feel free to contact us about bookings and we can offer a quote!